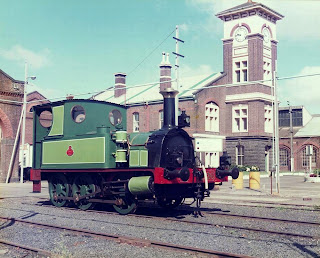 Put into service on 30 June 1893, Z-Class No. 526 was the first locomotive built at the Newport Railway Workshops, Melbourne. Classified as a 0-6-0 type Side-Tank Goods Motor Engine, this locomotive was stationed at Princes Bridge Depot and the North Melbourne Depot in the mid to late-1890s. It also has a boiler inspection stamp indicating it was at the Sale Depot in May 1896. In 1903-04, No. 526 was converted to a locomotive type steam crane at Newport Workshops to a British Dubs & Co. design. It left Newport Workshops on 23 January 1904 with a new identity as 'No. 3 Steam Crane'. The crane operated by steam from the boiler had a lifting capacity of 5 tons. For most of its working life it was stationed at the North Melbourne Locomotive Depot where it was known by the affectionate name 'Polly'.

As a steam crane, Polly attended the scene of accidents and derailments. It is known to have been present at the 1908 Braybrook Junction-Sunshine accident, accidents at Riddell and Beveridge and the 1911 Harvey Creek derailment near Molesworth. It was equipped with a J-Class tender carrying 2000 gallons of water and 65 cwt of coal, and later a K-Class tender. It was officially withdrawn from service on 16 June 1978, having been based at the South Dynon Diesel Shop for the last period of its working life

Between 1980 and 1985, the locomotive was restored at Newport Workshops to its 1893 Side Tank configuration by a team of VR apprentices, staff and members of the Australian Railway Historical Society Victorian Division including Gerald Dee. The restored locomotive was donated to the Museum of Victoria in 1992. (from Museum of Victoria)
at 12:36 PM