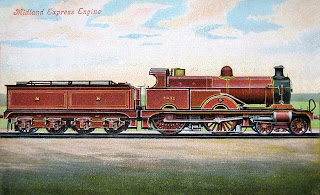 We mentioned in an earlier post that the 4-4-0 type is often termed "American" although other railways used them, and the Midland Railway of England (which became part of LMS in the 1923 grouping) was particularly well-known for them, although their design and appearance is obviously different to those used in North America.