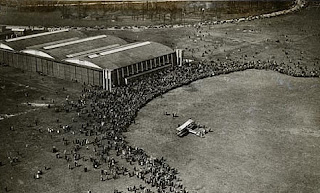 At least according to the compilers of the Collins Dictionary, in fact 'aerodrome' and 'charabanc' (from French char à banc, "benched cart") are among the words presumed to have become 'extinct' in the past year.  Well, the latter certainly, the former is a bit dubious.
Collins Dictionary lexicographers have compiled a list of words which have fallen out of use by tracking how often they appear.
The UK Guardian reports:
Other words on the list include "wittol"– a man who tolerates his wife's infidelity, which has not been much used since the 1940s.
The terms "drysalter", a dealer in certain chemical products and foods, and "alienism", the study and treatment of mental illness, have also faded from use.
Some of the vanished words are old-fashioned modes of transport such as the "cyclogiro", a type of aircraft propelled by rotating blades, and charabanc, a motor coach.
The "stauroscope", an optical instrument for studying the crystal structure of minerals under polarized light, is also no longer used.
Dr Ruth O'Donovan, asset development manager at Collins Language Division in Glasgow, said: "We track words using a very large database of language which is a very large collection of various texts from spoken and written language, including books, newspapers and magazines so we can track language change over time.
"We track new words but we can also track for the frequency of existing words and when they get below a certain threshold we see them as being obsolete, though they may be used in very specialist circumstances.
"Such words are in our largest dictionary but we've categorised them as obsolete, as although they go out of general use they are still of interest to historians so it's useful to have them in the dictionary. But we would exclude them from our smaller dictionaries."
Other words which have passed out of use include 'supererogate' which means to do or perform more than is required.
While 'succedaneum', meaning something used as a substitute also no longer trips off the modern tongue.
Neither does 'woolfell'. the skin of a sheep or similar animal with the fleece still attached.
The dictionary experts have also identified a word still commonly used in the 21st century, though its meaning has changed.
While 'fun fur' now means synthetic fur, up until the 1960s it meant cheap fur from animals such as rabbit, which was often dyed various colours.
The data was discovered as part of research for the publication of the next Collins English Dictionary in October this year.
at 8:46 AM