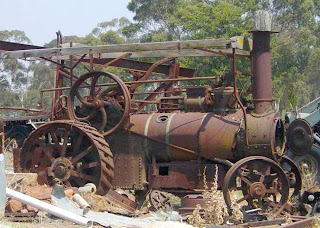 Used more as mobile machines particularly for farms, than for transport as such, steam traction engines are, like railway steam engines, a very appealing pioneering technology. This example was manufactured by Cliff & Bunting Pty Ltd of North Melbourne about 1912. It is a single-cylinder two-speed 8 nominal horsepower general purpose engine with locomotive style multitubular boiler; its weight is put at 8.5 tonnes. It has 4-shaft open spur-gear transmission, a steam dome, radial-arm single- eccentric reversing gear, belly tank, flat-spoked steel-rimmed wheels and Ackerman steering gear with fixed front axle. A winch drum is fitted to the rear axle between the lefthand rear wheel and firebox.

It is believed to be the only surviving example of between 6 and 12 traction engines built by this firm between 1907 and 1912. The acknowledgement line states it was "Purchased with the assistance of the Sunshine Foundation and the Australian Government through the National Cultural Heritage Account."
at 8:01 AM