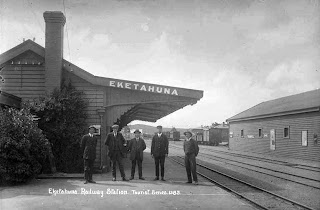 A little town on the North Wairarapa railway line, Eketahuna currently has a population of a bit under 600.  Passenger trains ceased on the North Wairarapa Line in July 1988, so the town hasn't needed a station for a while.  But here is the entry about it in the The Cyclopedia of New Zealand [Wellington Provincial District] from the 1890s:

"The Eketahuna Railway Station, eighty-eight miles [142 km] from Wellington, which is situated on the fringe of the town of Eketahuna, is the present terminus of the Wellington-Woodvile line of railway, so far as traffic is concerned, although the line is completed for some distance further north. This station, which was opened in 1889, is constructed of wood and iron, the stationmaster being assisted by two clerks, three porters, one guard, and a telegraph messenger; three engine-drivers, two firemen and a cleaner are also located in Eketahuna. In the season the traffic is very heavy, the principal freight being timber, wool, and butter. The business of the post, telegraph and money order offices is conducted at the station, and is under the charge of the stationmaster. Eketahuna is also in telephonic communication with Masterton, Pahiatua, and Alfredton."
at 1:15 PM