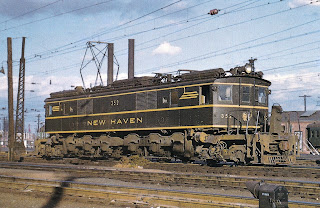 These big, box cab electrics propelled heavy-traction technology into the modern era. A 1931 product of General Electric, the locomotives combined a new 2-C+C-2 wheel configuration with then relatively new AC-traction motor technology. Originally geared for 70-mph service, at least one was modified in 1933 for 120-mph testing on the Pennsylvania Railroad. They were rated at 3,440 hp. The PRR's engineering department was so impressed with the performance of the EP-3 trials, that the unassuming box cabs would eventually be the prototype for what may be America's most well-known electric, the Pennsylvania's GG-1. Some served the NH until 1961, but not one of the 10 locomotives of this class was saved from the scrapper's torch. However, you can own a finely finished and detailed model, with diecast metal body, chassis and sideframes. Models are finished in authentic NH-colors and are fully assembled and ready to operate from track power or from live catenary through the fully articulated pantographs. website
The postcard pic shows one of these passenger haulers, No. 352, at New Haven, Connecticut, on 11 October 1958.
at 9:22 PM