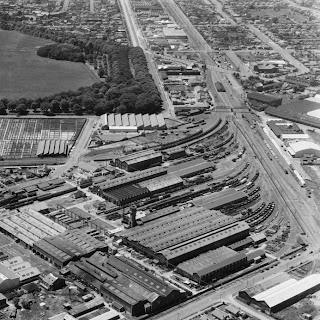 Today's historic picture is a detail from a White's Aviation photo from November 1947 showing some of the Addington railway workshops in Christchurch, looking east with Moorhouse Avenue at the top parallel to the railway line leading to the then Christchurch station and Lyttelton.
The scene has totally changed in the intervening years - the workshops have gone, except the historic reinforced concrete water tower in the centre, which now is an ornament next to the present Christchurch railway passenger station opened in 1993. The rest of the workshops area, as well as the livestock yards, is now covered by shopping complexes.
A little to the east of the workshops (above them in this view), one can see the original Addington station.
at 8:46 AM