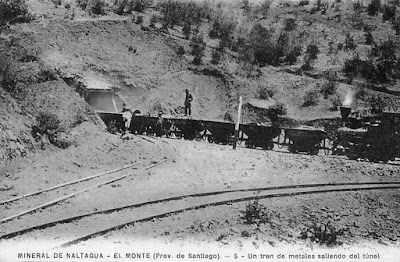 The Societé des mines de Cuivre Naltagua (SMCN) was founded in 1908 by Count Bernard de Saint-Seine, with Count Lesnil, son-in-law of the Baron de Rothschild, and the wealthy banker Michel Renebey. Its headquarters were in Paris. "The promoters were capitalists and merchants who were not familiar with the mining activities, which explains the numerous errors that were incurred in the project and the construction of Naltagua."

The company bought the Naltagua hacienda and more than 120 mining properties that covered a strip about 1 kilometer wide and 7 kilometers long south of the El Monte railway station from Santiago to San Antonio, which at that time only reached Melipilla.