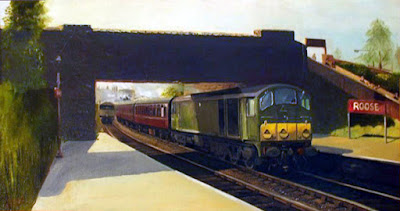 A Type 2 Metropolitan -Vickers Co-Bo (D5700-19) which were introduced in 1958 as first generation diesels. Most worked on the Furness line in the early 1960's (then Lancashire). Here one example, D5714, is shown arriving at Roose with a Barrow-in Furness to Manchester service. A goods train has just passed through on its way to the docks, likely hauled by an 8F.


Oil on canvas panel, 12 x 24". Signed prints are available from the artist, Wallace W. Trickett and the original is also for sale.
at 4:26 PM