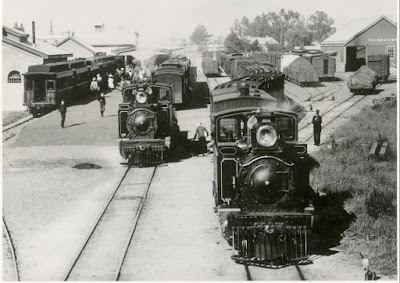 "This photograph was taken from either the footbridge over the railway lines or the signal box alongside the lines and looks eastwards towards the Square. The railway station (with roofed platform) can be seen on the left, directly opposite Roger Mulrooney’s Masonic Hotel (which is the building standing today, on part of section 340). Further along Main Street can be seen the three-storey Railway Hotel on the corner of David Street (section 338). This hotel building was erected in 1904-05, thus helping to date this photo. In the far distance (over the roof of the railway station) can be seen some scaffolding rising into the sky. This appears to be the Post Office Clocktower under construction which also helps to date this photo as 1905-06. In the centre distance can be seen the top of the Grand Hotel, a building which was erected in 1906. The railway siding in the left foreground crosses Main Street to a timber yard situated on section 342. The Station was established in 1889.  October 1935 the last passenger train left the Maine Street Station. On June 7 1965 the last goods train to ever pass through the square traveled through. From 1964-68 all railway buildings were demolished and removed from the Main Street site." (Manawatu Heritage website)
at 9:56 PM