trucks outside the Main Trunk Brewery, Taihape, circa 1920 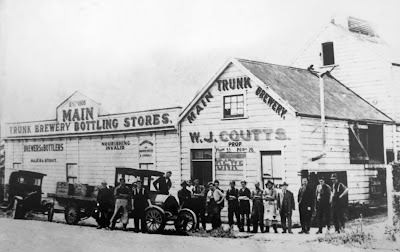 This was founded by W. Joseph Kühtz in 1908 - as those who have our books know, the NIMT was completed in 1908; presumably railway workers drank enough to justify a local brewery although the "nourishing invalid" sign is curious.

In 1917 with the storm of anti-German sentiment because of WW1, Kühtz changed his name to Coutts. The brewery later became the Cascade Brewery and ultimately part of Dominion Breweries in Auckland. Kühtze's name was later given by Dominion Breweries to a brand of lager.
at 7:31 PM

i have 4 old bottles from this company.