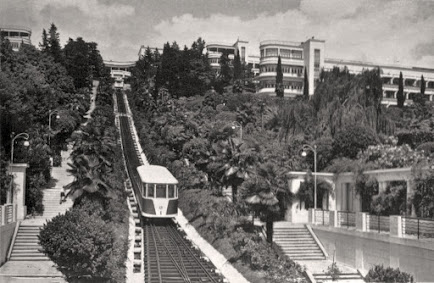 Sochi has many big resorts and spa treatments called sanatoriums. The Voroshilov Sanatorium had built a funicular in 1930 that allowed residents direct access to the sea. The funicular operation was stopped in 2002 and remained abandoned until, with the Winter Olympic Games of 2014, the funicular was fully reconstructed (track, cars and machinery) by Garaventa.
The line is 373 metres long with a height difference of 81 metres (a 22% average gradient).  More
at 5:48 PM