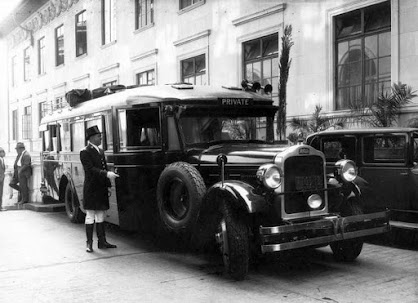 C.K.G. Billings' private vehicle that he termed the "Land Yacht"; a chauffeur can be seen opening the front passenger door. The Land Yacht was as large as a sightseeing bus and could accommodate a party of six people and attendants. It had main compartments at the front and back, as well as a central section devoted to a kitchen, electric icebox and shower bath. The rear of the automobile was an observation sitting room with room for bridge tables, and both of the passenger sections could be converted into sleeping quarters. Mr. Billings' Land Yacht may have been an early and luxurious version of the modern-day RV.

Cornelius Kingsley Garrison Billings, or C.K.G. Billings, was a wealthy industrialist, a noted horseman, and a tycoon from Chicago. In 1901 Billings retired at the age of 40 as the President of the People's Gas, Light and Coke Company in Chicago; the company was family owned.  (L.A. Public Library)
at 12:03 PM