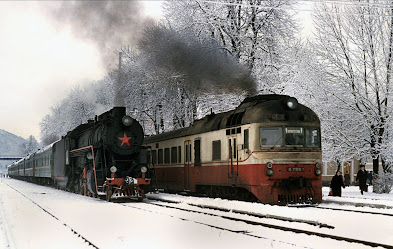 A class L of which 4,199 were built between 1945 and 1955.  Here it looks to be losing a smoke contest with a D1 class Diesel-Multiple Unit (see earlier post).
"It was designed and built by the Kolomna Locomotive Works shortly after World War II under supervision by L.C. Lebedyanski. It was originally designated Class P (for Pobyeda, "victory"), but was redesignated Class L in honor of its designer.

"In conjunction with the FD class 2-10-2, it was primarily used to haul mainline goods across the terrain of the Soviet Union...  they operated with the Soviet Railways until 1975."
More
at 10:21 PM