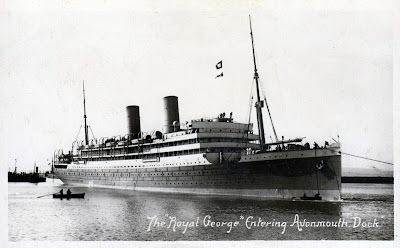 This was a passenger ship built in 1907 by Fairfield, Glasgow, as Heliopolis for the Egyptian Mail SS Co. on the Marseille to Alexandria service. In 1914 the ship was sold to the Canadian Northern Railway Co. and renamed Royal George for service between Bristol and Quebec. Subsequently she was taken over by Cunard in 1916. After WW1 she moved to Liverpool--New York service. She suffered major stability problems and in 1920 was relegated to being a Emigrant depot ship at Cherbourg in 1920 before being laid up at Falmouth. She was broken up in 1922 at Wilhelmshaven.
at 5:18 PM