1958 BUT trolley bus in Wellington art 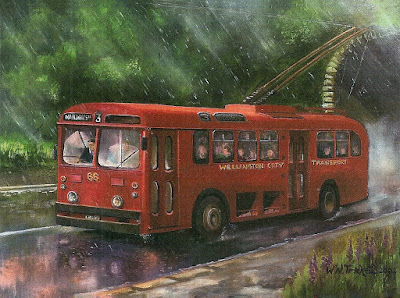 A British United Traction trolley bus is shown in typical winter weather. It was built in the UK by Metropolitan Cammell Weymann as a 43 seater with English Electric gear and motor between 1958-1960. It was part of a 32 strong batch for Wellington with a further 18 following four years later in 1964. It was later saved for preservation by the late Wayne Little.

The original oil on canvas panel work by Wallace W. Trickett in 2002 was purchased by the Little family.