a Df from English Electric with a goods train between Porirua and Paremata, 1954 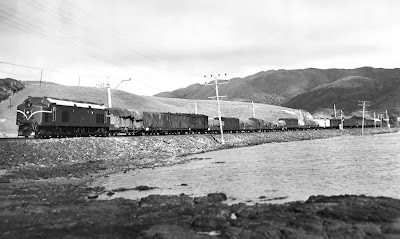 Most likely the class leader 1500 and a test train as the electric locomotives were normally used on trains between Wellington and Paekakariki in that era.

With the realignments of both the road and railway in the decades since it's a bit hard to identify exactly where this was taken.  An NZR photo considered for but not used in the book Wellington Transport Memories.
at 9:53 AM