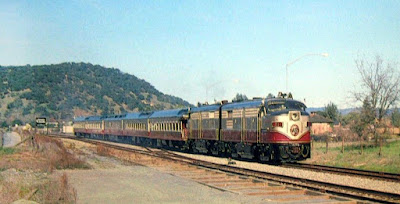 This runs on 25 miles (40 km) of former Southern Pacific track through the Napa Valley, which is probably the best-known wine making region in the U.S. It has two engines (Alco PAs from 1959 built by the Montreal Locomotive Works - unit 73 was converted to run on compressed natural gas in 2003), three kitchens on board and a collection of early 20th century Pullman rail cars faithfully restored with Honduran mahogany paneling, brass accents, etched glass partitions and plush armchairs that evoke the spirit of luxury rail travel in the early 1900s.