for some light relief: Israeli vulture detained in Lebanon on suspicion of being a spy 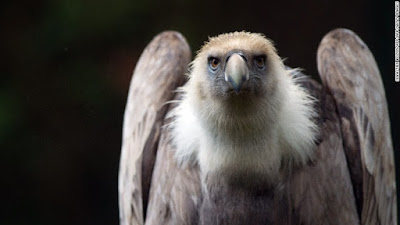 A vulture that flew into Lebanon from an Israeli nature reserve has been captured on suspicion of spying, according to local media reports.

Gamla Nature Reserve tracked the bird to near the southern Lebanese village of Bint Jbeil, which is just a few kilometers over the border from Israel -- then reports began trickling in that the bird was being held by locals who suspected it because it had Israeli tags and devices.

A series of pictures also surfaced: one of a vulture with Israeli tags and a rope tied around its leg; another of a transmitter on the same bird's back; and another of two men displaying the bird's massive wingspan.

The vulture was released in the same place it was caught after it was "certain that it was not carrying any hostile [spying] equipment," according to local Arabic news site bintjbeil.org. Since then, the Israeli parks authority has not been able to track where the vulture went and is worried about its health.

Given the enthusiasm that Muslims have for decapitation, one suspects that was more likely the vulture's fate, particularly if it had Israeli tags.
at 7:18 PM