Egypt's president al-Sisi - a stalwart in the battle against Islamists 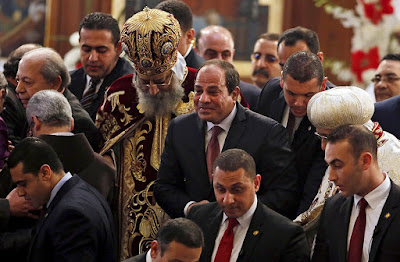 Five years ago the western-friendly government of Egyptian President Hosni Mubarak was forced out of power in the so-called Arab spring and taken over within a few months by the Muslim Brotherhood under Mohamed Morsi.  After a year and big protests against Morsi in turn, chief of the military Abd Al-Fattah al-Sisi took the country back.

Since then al-Sisi has been committed to undoing the harm done to the region by Islamists and resolutely fought terrorist groups - Hamas and ISIS in particular - and has tried to make the country safe for tourists. He has re-established good relations with Israel and has encouraged other Arab countries to join Egypt's 38-year peace treaty with Israel (the only other country which has is Jordan).

Most significantly, he has repeatedly called for reforms to Islam - "we need a book that teaches us to love" - and in January last year visited a mass of Coptic Christians (in the picture) and apologized for not rebuilding churches burned by extremists fast enough.

If all the Arab countries had a leader like al-Sisi, there would not be the problems there are now.


“We need a book that would teach people that there is diversity in the world. From the moment our children go to school and until they are at university, we must tell them that we are not all the same. They will accept this with love because this is how our Lord created us… if we did so we would set the example of true love between people. That way, nothing could ever harm us.”– Egyptian President al-Sisi