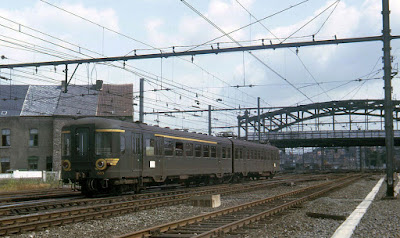 This was one of the batch later denominated class AM55 (meaning automotrice from 1955). Being suitable for stations with low platforms these were used throughout Belgium for nearly 35 years on semi-direct services while the earlier AM50 were essentially limited to the axis Antwerp - Brussels - Charleroi. They were progressively removed from use at the end of the 1980s, the last in 1993. A few of them were sold to foreign networks but none were preserved in Belgium.