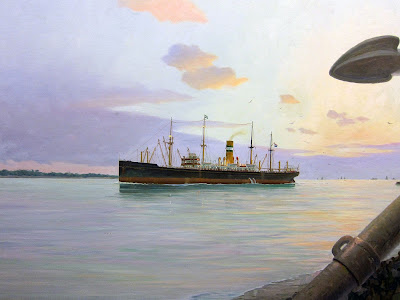 This was a 8,251 grt cargo ship built in 1913 by Irvines in West Hartlepool, England, for the Nederlandsche-Amerikaansche Stoomvaart Mij. N.V. (NASM, Holland-Amerika Line, HAL), of Rotterdam. She had a three-cylinder triple expansion engine and a stated speed of 13 knots. The ship was seized at Baltimore by the United States Government on 20 March 1918 under the right of angary, which allowed a belligerent power to use the property of a neutral nation subject to full indemnification, and was lost in a collision with the S.S. San Jacinto in July 1918.  Here she is seen from the Maasdam, another HAL ship. (painting commissioned and owned by the Holland America Line)
at 2:35 PM