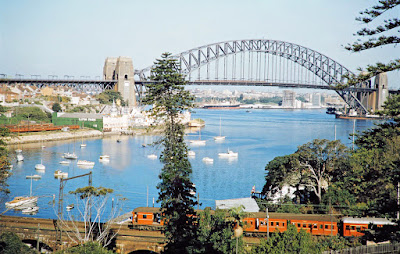 A pic taken in the 1960s from about where Wendy's Secret Garden is now (below).  This short branch line was originally for cross-harbour ferry connections, but the tracks in front of Luna Park became simply a stabling area for the electric trains after the Harbour Bridge was completed in 1932.

One notes a Union Steam Ship Company ship berthed in the centre distance.

For lots more, see the book Railway Electrification in Australia and New Zealand.