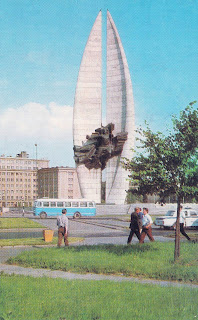 An official postcard from the 1970s of the monument erected that decade in this southwest city of Poland, described both to glorify the communist revolution, and for fighters for Poland (the two don't exactly go together given the way Stalin and his successors treated the Poles).  You would think they would have mown that lawn before taking the photo.
at 11:08 AM