from partial to full-frontal yellow on British Railways 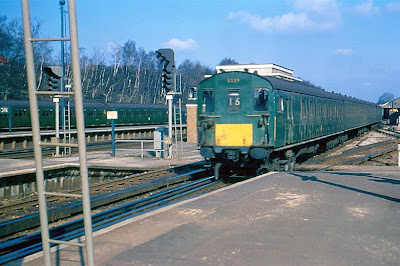 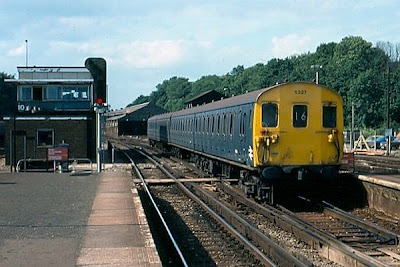 Two photos of a British Rail Class 415 (or 4EPB) electric multiple unit entering Orpington, Kent, the first in 1970, the second in 1980.  It can be seen that in the intervening decade, the dark green has been replaced with blue and the yellow patch on the front has become a yellow wall.

As far as we can tell from photos, the yellow patch first appeared on BR in 1963 and became de rigueur in the mid-1970s.  With the devotion of NZ officialdom to practices in the 'mother country', NZR followed suit with yellow fronts, although not until the late 1970s and only with diesel locos when they were repainted in the fruit salad scheme.  It has since become universal.

In the stories I write teething troubles with the BR blue livery meant a number of electric multiple unit suburban trains carried British Railways green with full yellow ends between September 1967 and late 1971. Although I remember the blue livery with large BR arrow and full yellow ends, the blue and grey livery of the early 1980s was adequate for the Class 415 4 EPB electric multiple unit suburban trains.