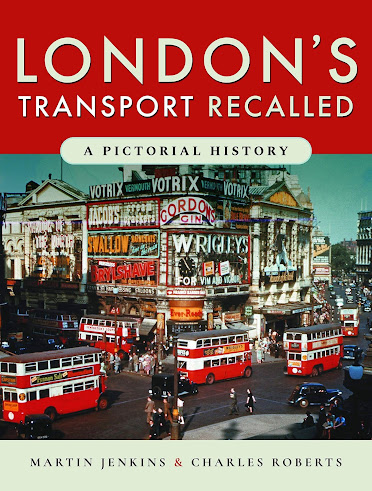 The concept of this book is similar to that of our Wellington Transport Memories, but because London is 20 times the size of greater Wellington, a reduction is scope was clearly needed, and achieved by confining the coverage to the quarter-century following WW2; it also enabled all the pictures to be in colour.

So, there are photos with detailed captions of trams, trolley-buses, diesel buses, electric Underground trains and surface trains hauled by steam electric and diesel locomotives, wharves and ships, and aircraft from the 1950s and 1960s.  There is even a picture of two naval submarines, Acheron and Andrew -- as in Wellington in those years, naval vessels were eagerly toured when open to the public.

For those not so much into historic vehicles, one gets the incidental streetscapes of the era, fashions, signage, exterior decor and so on, all of which is a valuable record of how things were within the lifetime of many. If they lived in London they should recognise vistas even if they have substantially changed since.

Private transport isn't covered specifically, although there is the quirky coal merchant horse and cart and a few light industrial railways, the latter were covered also in our book.

As may be expected, although most are good, the quality of the photos varies a little. Even though there are finnicky people out there who expect everything to look like it was taken yesterday, there are cases when historic interest outweighs technical quality.

Those who liked our book will like this too.