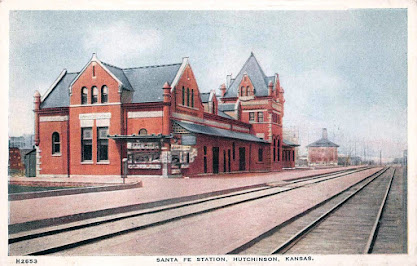 "Hutchinson is a train station in Hutchinson, Kansas, United States, served by Amtrak's Southwest Chief train. Hutchinson station was originally a Victorian structure built in 1897 that was replaced by a more contemporary brick depot in 1950. Both buildings were built and owned by the Atchison, Topeka and Santa Fe." (wikipedia)
The station from 1950 is less interesting.
at 9:20 PM