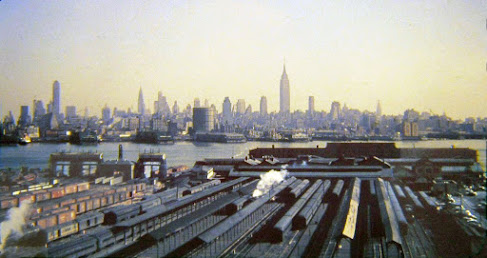 "Weehawken Terminal was the waterfront intermodal terminal on the North River (Hudson River) in Weehawken, New Jersey for the New York Central Railroad's West Shore Railroad division, whose route travelled along the west shore of the Hudson River. It opened in 1884 and closed in 1959. The complex contained five ferry slips, sixteen passenger train tracks, car float facilities, and extensive yards. The facility was also used by the New York, Ontario and Western Railway. The terminal was one of five passenger railroad terminals that lined the Hudson Waterfront during the 19th and 20th centuries, the others were located at Hoboken, Pavonia, Exchange Place and Communipaw, with Hoboken being the only one still in use."