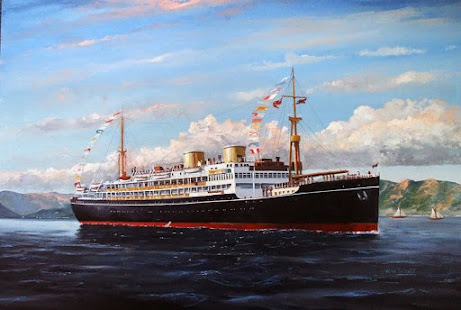 The Huddert and Parker Australian passenger liner which served the Tasman service between Australia and New Zealand in direct competition to the Union Steam Ship Company of New Zealand's Awatea (built in 1936). Both ships were fast and won awards for their performances. The oil painting shows the Wanganella on her maiden voyage in Wellington Harbour in 1933.
A commissioned work of Wallace W. Trickett in 2014, which now hangs in Singapore.
For lots more, see the book Wanganella and the Australian Trans-Tasman Liners by Peter Plowman
at 9:31 AM