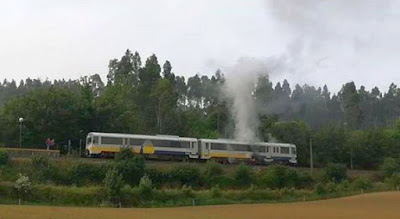 Readers of our books will know that the NZR Fiat railcars were known for occasionally catching fire, so here's a little incident in the Galicia region of Spain that recalls the scenario.

From this webpage: The train that left Ferrol at 8.20 am bound for Oviedo suffered a fire shortly before nine in the morning, and stopped at Labacengos, in Moeche. The two travelers in the affected car exited without problems.

The first to arrive were workers from the Moeche City Council, who used fire extinguishers to put out the fire, until firefighters arrived.