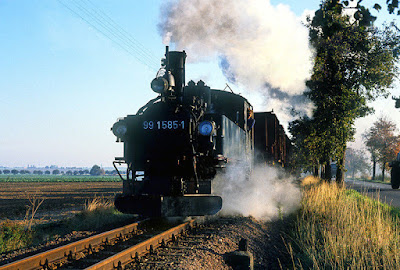 In German notation a B'B' type or in English notation an 0-4-0+0-4-0 tank loco. Originally it was built for the Königlich Sächsische Staatseisenbahnen (Royal Saxon State Railway) by Hartmann in 1912 and absorbed into the DR (Reichseisenbahnen des Deutschen Reiches) roster in 1920 (which was renamed DRG - Deutsche Reichsbahn-Gesellschaft in 1924).

If the goods wagons look as big as the loco it will be because they are standard gauge and put on 750 mm gauge flat cars for that part of their journey.
at 5:48 PM