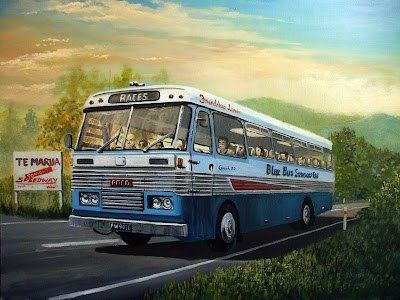 One of a series of Wallace Trickett paintings on the theme Tranzit 100 to mark the bus company's progress from 1924 when it was founded as Grey Bus Services of Carterton to the centenary in 7 years time.


Coach 22 was new to Blue Bus Services in 1971 as the company's first 45 seater. The late Les Stringer is shown taking it to the car races at Te Marua north of Upper Hutt around 1982. It was a popular and well patronized run for all ages, but most passengers came home covered in track dust.