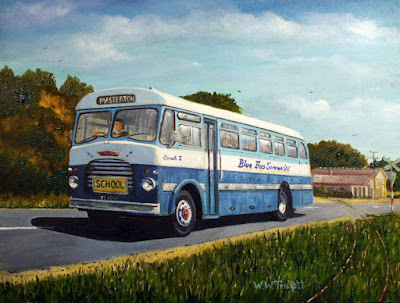 Blue Bus fleet number 2 is shown at Mauriceville in the Wairarapa on its morning school run with the regular driver of the day Margaret Goodin, circa 1981.

This is another in the TRANZIT 100 series: Crawley Ridley new to Martin Smith Motors of Masterton then sold to Blue Bus Services. The bus never carried the company's new branding of Tranzit, but ran on local school runs with no company name on its bodywork from 1985 to 1995 when it was retired and sold for preservation in Hawkes Bay. The same owner bought this Wallace Trickett oil painting.
at 4:10 PM