Poland axes promise to take in 7,000 Muslim migrants after Brussels suicide bombings as its Prime Minister warns of a 'plague' of radicalisation 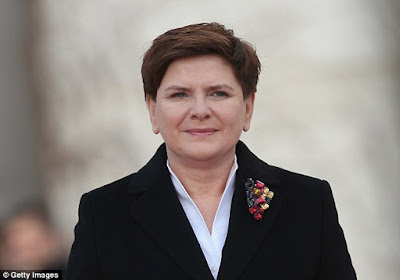 Poland today abandoned its promise to the EU to take in 7,000 migrants because of the jihadist attacks in Brussels that killed 34 people.

The country's previous government had agreed to take the migrants in, but today Prime Minister Beata Szydlo declared she would not be honoring the agreement.

Speaking at the Belgian Embassy in Warsaw where she laid flowers to honor the victims, she appealed for urgent talks to allow Europe to counter the 'plague' of radicalisation.

Presumably she means the plague of Muslims. Incidentally, the Daily Mail has decided to solely use the term 'migrant' when referring to them to reflect the reality that few of them are genuine refugees and nearly all are economic migrants after welfare benefits.  Some are also jihadists, as ISIS itself has made clear.