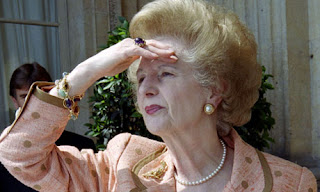 Arguably the most controversial British PM of the 20th century, Margaret Thatcher's policies caused a major and rapid reorgansiation of the British economy and her 'cold turkey' approach initially saw saw a big rise in unemployment. One of us remembers arriving in Britain in July 1980 when it stood at 1.6 million. By November it was over 2 million and rising steadily. On top of this her 'tight grip on the money supply' saw the value of the £ soar by about 20% against the $US, making British exports less competitive, and tourists suddenly found themselves having to pay British VAT at 15% instead of 8%.

Her tax ideas were also regressive when it came to the "poll tax", which even members of her own cabinet were opposed to, and led to her ousting in 1990.

Although she didn't like government spending, she was happy to spend big on defense, which paid off for her politically in the Falklands Islands war with Argentina of 1982.

In the last few days there has been a surge in demand for Thatcher titles. The authorised biography of Margaret Thatcher will be published immediately following her funeral by Penguin imprint Allen Lane, while a further biography from Transworld will be out later this month.

Allen Lane's Margaret Thatcher: The Authorised Biography, Volume One: Not for Turning by Charles Moore was commissioned in 1997 on the understanding that it would not be published during Thatcher's lifetime. Moore was given full access to Thatcher’s private papers and interviewed her extensively, as well as speaking to her family and those who worked with her. Permission was also given to civil servants to speak to Moore about Thatcher, and he was given early access to government papers held back under the 30-year rule. Thatcher did not read the manuscript before her death.
at 11:08 AM

In the North east it was the mine closures, in most towns it saw the deregulation of Borough councils and their corporation bus fleets let to tender and services either cut or abandoned. Over on the Cumbrian coast many of my friends and their familes seivved at her not acknowledging what British Nuclear fuels had told the Government, namely heavy water had been discharged into the Irish Sea for some time. This eventually saw the rise in Luekemia cases , children dying and many infected who swam at the beaches. These were eventually closed once the press got hold of the facts just a year or so before Chernobyl when Cumbria once again got dowsed in rads from the fall out .The Thatcher years were not happy years for most who lived in a Britain gripped by fear and poverty on scale not seen since the 1930's.