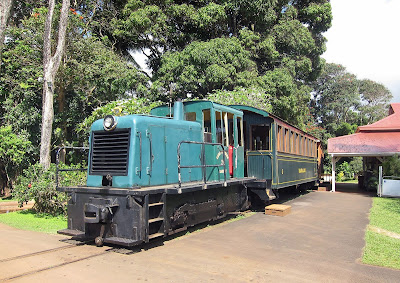 As used on the Kauai Plantation Railway on the island of Kauai in Hawaii, one of two owned by this operation which runs a circuit around a 105 acre plantation of various fruits, macadamia nuts and sugar cane (now used only for making rum).  The passenger cars were made in the Philippines and are reproductions of the railway cars of the period of King Kalakaua of Hawaii. (Geoff Churchman pic)
at 5:43 PM