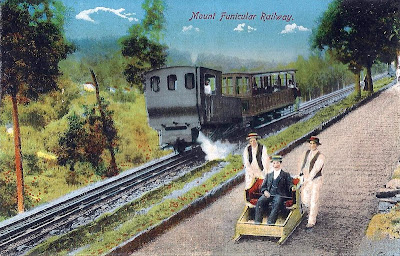 Not a funicular as by definition a funicular involves a rope as the means of propulsion (see earlier post about etymology).  An undated postcard, but between 1893 and 1912 as in 1912 this railway from Funchal at the bottom was extended from Monte (Mount) to Terreiro da Luta at 867 metres altitude.  The railway ceased operating in 1943 and wasn't resumed. The downhill sledges shown here still exist apparently.