Railways will be good business 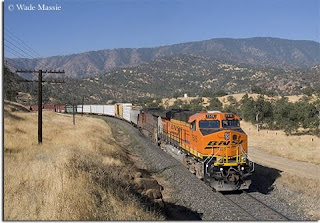 As a rebuff to the stupidity of New Zealand Treasury officials, as expressed in the letter by Alan Waller reproduced in our 28 October post, American billionaire investor Warren Buffett will pay $26 billion to buy out Burlington Northern Santa Fe Corp in a bet that the America's largest rail company is poised to benefit from a recovering U.S. economy.

The deal announced Tuesday, Buffett's biggest-ever acquisition, also represents a bet on coal and new interest in a storied but highly cyclical American industry that has tried to reinvent itself by emphasizing its ability to move goods cheaply and efficiently.

The deal was priced at a premium of 31.5 percent over BNSF's closing stock price on Monday and values the railroad at $34 billion, or 18 times estimated 2010 earnings. BNSF shares jumped 28 percent in afternoon trading; other U.S. and Canadian rail shares also rose.

"It's an all-in wager on the economic future of the United States," Buffett, who has been building up his rail holdings for several years, said in a statement. "I love these bets."

So much then for the idiotic thinking of people like Mr Waller (or should it be Wally?).

Books on the history of Burlington Northern Santa Fe (separate companies until 1997) are available from our on-line shop.
at 9:49 AM