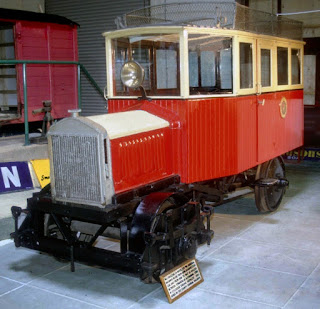 According to Donegal Railway Heritage Centre: "Railcar No. 1 from Donegal Railways. Built in 1906 by Allday & Onions in Birmingham, as an inspection car, it cost £237, and was powered by a Ford petrol engine. During the coal strike in 1926, it was used for passenger work, on a regular service between Stranorlar & Strabane. As well as its own 6 seating capacity, it also pulled a trailer with an extra 27 passengers. Larger railcars were then built powered by Ford petrol engines, and diesel power introduced in 1931."
at 1:27 PM