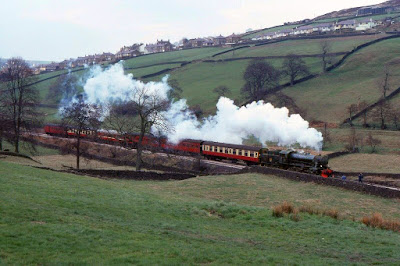 It was originally built in England at the Vulcan Foundry in 1945. It was dispatched initially to the Netherlands and sold to the SJ of Sweden in 1953, but only lasted there until 1956. It was repatriated to England in January 1973 and based on the Keighley Worth Valley Railway (KWVR), as in the pic above at Oxenhope. At this stage it was not in the state it was originally built in as it had been modified.