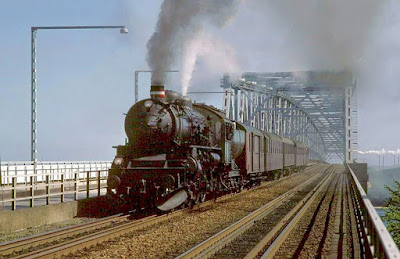 In the years 1914-16 Nydquist & Holm built 11 new locomotives for the Swedish state railways which ran in southern Sweden. But in the 1930s, a number of main lines were being electrified in Sweden, which meant that the need for steam locomotives was dwindling. Therefore, in 1937, the Swedish state railways sold the 11 locomotives to the DSB which gave them the designation letter E, and they hauled both passenger and freight trains in Denmark until the end of the 1960s. The acquisition of the Swedish locomotives was so successful that in the 1940s DSB ordered a further batch of 25 of the E-class from the Frichs factory in Aarhus, making 36 of them.
at 9:25 AM