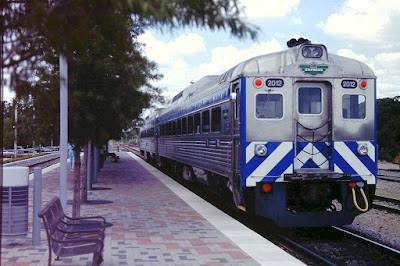 Named after the Trinity River, which flows between Fort Worth and Dallas, the 34-mile (55 km), 10 station TRE was launched on 30 December 1996, shortly after the inaugural service the Dallas DART Light Rail system, operating from Union Station to the South Irving Station. It runs along a former Rock Island line that the cities of Dallas and Fort Worth purchased in 1983 for $34 million.

On 18 September 2000, the line was extended to the Richland Hills Station and, for the first time, there was rail service available between downtown Dallas and Dallas-Fort Worth (DFW) Airport. On 13 November 2000, the West Irving Station also opened. On 3 December 2001, the TRE was extended to its current terminus at the Texas and Pacific Station in downtown Fort Worth.