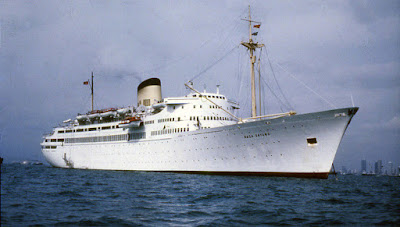 This ship began life as the Bergensfjord... "completed in 1956 by Swan, Hunter & Wigham Richardson, Wallsend-on-Tyne, Newcastle for Norwegian America Line. She was 18739 grt and carried 878 passengers.

"Bergensfjord was acquired by the French Line (CGT) as the De Grasse (2) in haste in 1971 to replace the Antilles which had been lost in a fire in January that year. Bought in March 1971, she was delivered to CGT in November.

"She was not profitable on the le Havre-Southampton-Caribbean service, and spent 1972 cruising. De Grasse (2) was sold in 1973, becoming the Rasa Sayang. In 1980 she was sold to Aphrodite Maritime Co, Greece. On 17 August 1980, a fire started in the engine room whilst she was under refurbishment at Perama, Greece. She was towed out of the docks, capsized and sank near the island of Kynosoura, some kilometres from Perama."

More details and photos
at 6:24 PM