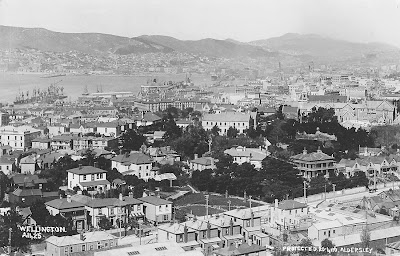 More of general than transport interest this one as it shows the harbour (east) side of Tinakori Road in the foreground, which was demolished for the foothills motorway of the 1960s, including one of the Katherine Mansfield houses in the centre right.

One of the questions we tried to answer but without success for the book Wellington: a Capital Century was how many houses in Thorndon in total were demolished to make way for for the motorway.  However, a 'ball park' figure is 100.  For more, see that book.
at 4:35 PM

My old school (Marist Thorndon) was a victim to the motorway, though some would say the motorway did a big favour by removing it. A number of my school mates lost their family homes though most had left home by then.