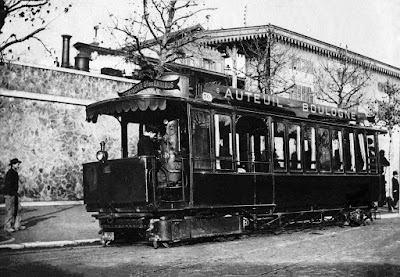 The type was designed by William Robert Rowan, Managing Director of the Scandia Company of Copenhagen, Denmark, in 1875. One was used in Melbourne and several examples were used in Budapest, Berlin, Moscow, and Stockholm. They appeared in Paris in 1889, year of the Exposition Universelle, as well as in Lyon and Tours.

In Paris three of them were put into service which shuttled back and forth on avenue Henri Martin on a short Trocadéro-Ceinture - Exposition of 1889 run, connecting the Chemin de fer de Ceinture station to the gates of the Trocadéro Exhibition.  The vehicles were single deck and comprised a vertical boiler at the front, resting on a bogie, and a passenger compartment at the rear, mounted on a single axle.

Because of their noisy operation and the continual release of steam the Rowans did not stay long in Paris. Sent after the closing of the Exhibition on the Trocadéro - Place Pigalle line, they were relegated to the suburbs on the TPO (Tramway Porte de Choisy - Orly Ville) line Auteuil - Boulogne where they provided service from 1891 to 1900 (pic above). They also circulated on the TA lines, Louvre-Saint-Cloud (1896-1902) and TK, Louvre-Charenton-Créteil (1903-1913) where they ended their career.
at 12:02 PM