In the Middle Ages it was the center of the city; at the beginning of the 19th century Alexanderplatz was one of the busiest squares in Berlin. Originally the square was called the Ochsenmarkt or ox market, but in 1805, after a visit by Russian Tzar Alexander I it was renamed Alexanderplatz. The locals simply call this large square 'Alex'.


Most of the buildings around the square were destroyed by Allied bombing during WW2. After the war it became the center of East Berlin and the square was used as a showcase of socialist architecture. This resulted in some plain bulky buildings and the huge 365-metre (1,197 ft) high television tower built in 1969. Known as the Fernsehturm or the Tele-spargel (toothpick) it is one of the largest structures in Europe and was built by a team of architects with the help of Swedish experts. It contains a concrete shaft, a steel-cladded metal sphere and a TV antenna. The sphere contains a revolving restaurant (Telecafé) at 207 metres and a viewing platform at 203 metres.
In 1969 two more monuments were added to the square, the Weltzeituhr (World Time Clock) by Erich John and the Fountain of International Friendship. The world clock shows the names of a number of foreign cities in different time zones. In 1997, when the clock was restored, a number of cities that were originally left out for political reasons were added, namely Jerusalem, St. Petersburg and Cape Town. On top of the clock is a simplified model of the solar system. The Fountain of International Friendship is a 23 metre wide circular fountain. At the centre of the fountain is a modern structure that consists of a series of basins along which water flows down. The fountain was renovated in 2002.

Since the reunification of East and West Berlin, Alexanderplatz is set to once again become the centre of Berlin.  It was known to be unattractive from an architectural point of view, so the city of Berlin commissioned an architectural competition which was won by Hans Kohlhoff (also one of the architects of the modern Potsdamer Platz). The resulting plan is for a complete redevelopment of the square, as well as the renovation and reconstruction of surrounding buildings. website. 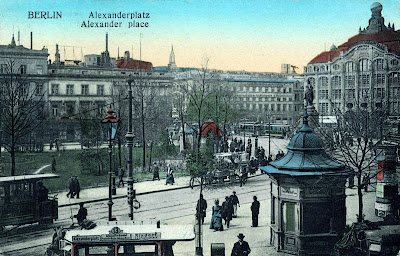 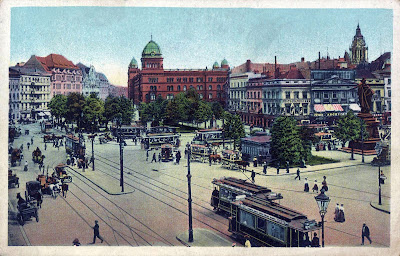 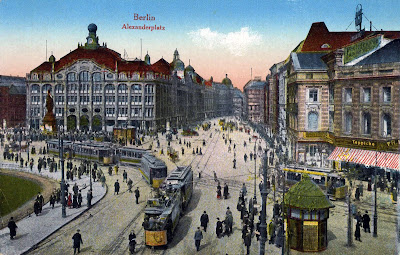 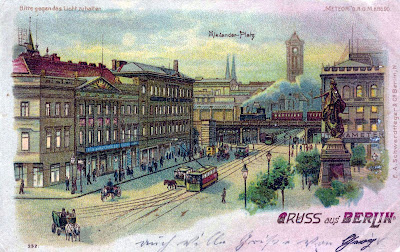